This is not really so much about our experience being here in Germany, so I hope you’ll bear with me as I digress a bit.

I was looking online for a new park to take the girls to on Friday afternoon and came across a small park nearby. I was trying to determine if it had a playground and subsequently discovered a memorial there called “The Deserted Room.” It is a bronze table with two chairs, one lying on the ground. It symbolizes the round up of the Jews during the Nazi regimen.

One day as we were going off on one of our adventures I noticed a memorial outside the train station, “Trains to Life, Trains to Death.” One side depicts children waiting to be taking to concentration camps and the other children leaving on the kindertransport, a rescue effort lead by England during WWII. I stopped in my tracks because I could not walk away without remembering all those innocent children. I stood there and cried for a minute thinking about it and how I was heading on a train to have fun. 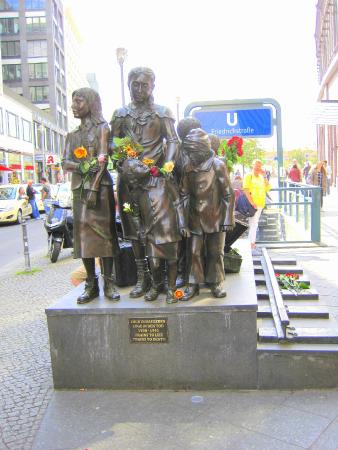 In Berlin the reality of what happens when people give into fear and allow hate to consume them can smack you in the face when you are least excepting it. It is part of this city. When you see these memorials, portions of the Berlin Wall, Checkpoint Charlie, and look up information of a place you want to go and inevitably learn about it’s role during the Nazi regimen you can’t ignore it. In the US it’s something you read about and maybe watch a few videos on in history class. Sure you find it appalling, but it’s history and you move on to the next topic. We talk about slavery and the civil rights movement, but I don’t think we truly acknowledge the full extent of what happened. I don’t think we put it out there and ask citizens to remember.

We have to remember these dark, painful times in history. We have to acknowledge what happened on a regular basis. We have to feel some connection to it or we forgot. Then as they say “we are doomed to repeat.” I don’t have a crystal ball, so I can’t say what the future holds. What I do know is that I do not like what I’m hearing from people in the US. People in positions of power are saying hateful things about lesbians, transgender, gay, Muslims, and immigrants in general. They are trying to put the blame for “America’s” problems on them and fear mongering people to believe that some “group” is the problem. This is a very slippery slope. One that truly scares me. Now I know some will say that words are taken out of context or that’s not exactly what he/she meant, but it’s all there in one way or another. The hate and fear mongering is there. The question is are we willing to see it? Can we put our political agendas and partisanship aside and really examine what is being said? Are they words that blame others? Are they divisive? Are they words that tear others down?

If they are then I hope you will truly question the individual delivering the message. I hope that we can all look for words that promote love, peace, and hope. This does not mean the messenger is weak, but the exact opposite. Anyone can rally the angry mob to kill the beast, but it takes strength and courage to calm their fears and think of a better solution. Think of Ghandi and Martin Luther King Jr. Far from weak.

Well I could go on and on, but I hope you get my point. I promise to be more light-hearted next time. It’s just impossible for me to be in this place and not remember what happened here.

I hope you’re all enjoying your Monday!

2 thoughts on “Surrounded by History”